Dmitriy Markovich has received his Ph.D. in 1994 and defended habilitation degree in 2003 in the

Kutateladze Institute of Thermophysics (Novosibirsk). Since 2017 he is a Director of the Institute. He is Professor of the state universities of Novosibirsk, Tomsk, and Krasnoyarsk. His areas of expertise are the transport phenomena in two-phase flow, hydrodynamics of liquid film flow, wave phenomena, vortex flows and turbulent jets, experimental methods for multiphase flows, power engineering and energy saving. He co-authored more than 150 papers in WoS/Scopus journals, 5 monographs and chapters in monographs.

Professor Markovich provided supervision in a number of Russian and International research projects (Russian Foundation for Basic Research, Russian Science Foundation, INTAS, European Framework Program, etc). One of such recent projects was carried out under the Seventh Framework Program of the European Union No. 265695 «AFDAR. Advanced flow diagnostics for aerospace research» (team leader from the Russian Federation) 2010-2014. In 2014 he was awarded a State Prize in science and technology by the Government of the Russian Federation, and Academician A.V. Lykov Prize from the National Academy of Sciences of Belarus.

Professor Markovich is a member of Editorial Boards of a number of international scientific journals, including "Int. Journal of Heat and Fluid Flow", "Flow, Turbulence and Combustion", "Journal of Engineering Thermophysics", "Thermophysics and Aeromechanics", member of Organizing and Scientific Committees of representative international symposiums: "Turbulence, Heat and Mass Transfer", "Two-Phase Systems for Ground and Space Applications", "Particle Image Velocimetry", "Application of Laser Techniques to Fluid Mechanics", "International Symposium of Flow Visualization", etc. In 2011 he was elected a Corresponding Member of the Russian Academy of Sciences (RAS). Currently, he is General Academic Secretary of the Siberian Branch of the RAS and Member of the Presidium of RAS.

A swirling motion is often imposed on fluid flows to promote mixing and heat and mass transfer. In particular, swirling flow with a central circulation zone is used in combustion chambers to stabilize flames. The recirculation zone is formed in swirling flow when its vortex core undergoes breakdown under adverse pressure gradient conditions. In particular, this phenomenon takes place when swirling flow passes through an expansion. Another phenomenon of swirling flows is a precession of the vortex core. In some cases, the precessing vortex core (PVC) is weak, whereas in others it induces strong velocity and pressure fluctuations. Role of PVC in stabilization mechanism of swirling flames and occurrence of unsteady combustion regimes is still a rather debated issue. The present talk will report on the recent achievements in quantitative evaluation of the impact of large-scale vortex structures, including PVC, to turbulent mixing and combustion in swirling flows based on advanced PIV and PLIF measurement techniques. 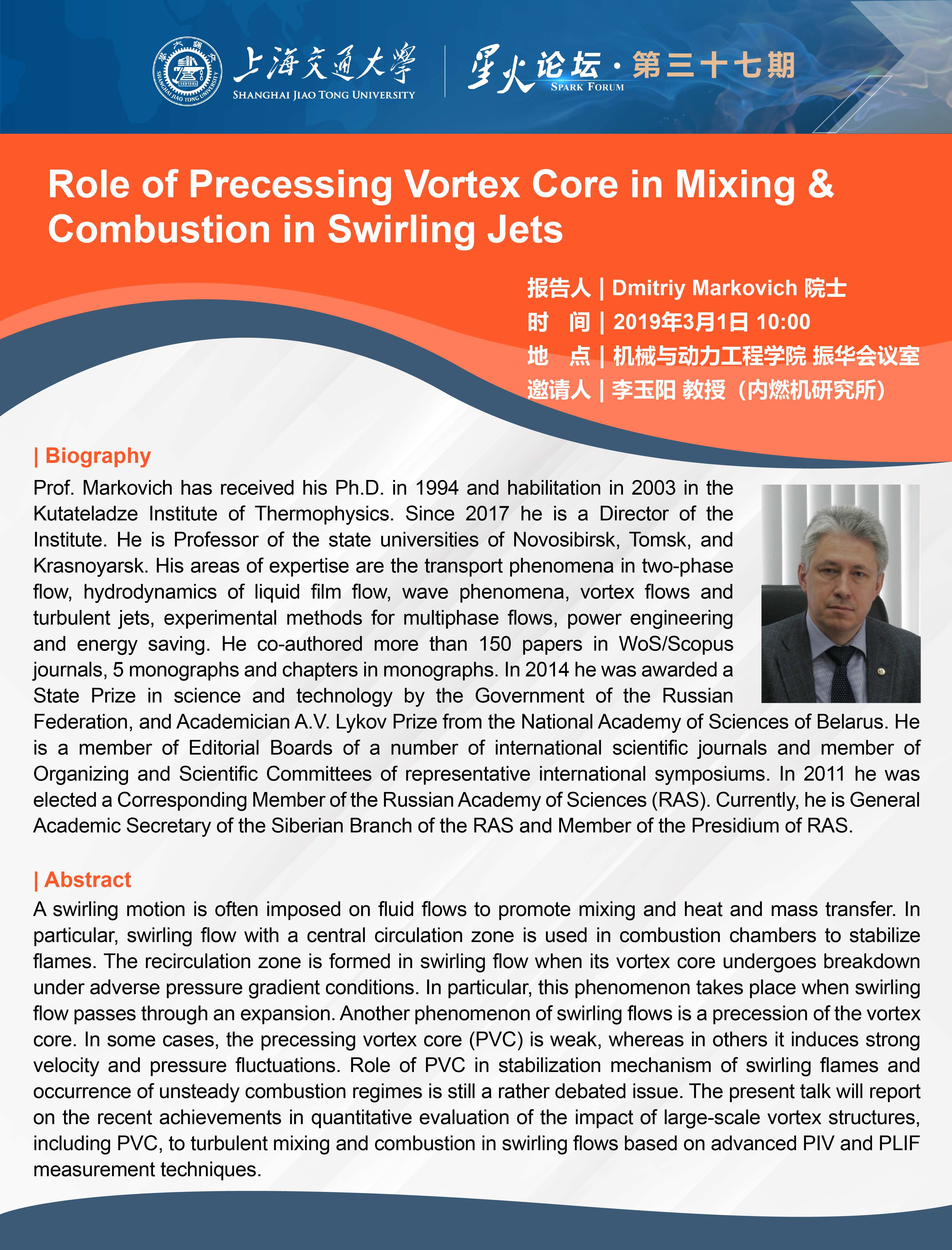