Recently, Prof. Changying Zhao’s group published one paper entitled "Evolution and nonreciprocity of loss-induced topological phase singularity pairs" on Physical Review Letters. Based on nonreciprocal systems, the researchers have unveiled the dynamic and asymmetric evolution mechanism of topological phase singularity pairs (TPSPs) in spectra space and its applications in breaking Kirchhoff’s law of thermal radiation. The first author of this work is Ms. Mengqi Liu (PhD student in SJTU). Prof. Changying zhao (SJTU) and Prof. Cheng-Wei Qiu (National University of Singapore) are the corresponding authors of this work.

The Kirchhoff’s law of thermal radiation indicates the equality of emissivity e(λ,θ) and absorptivity α(λ,θ) of an object under thermal equilibrium. Exploring to break this detailed balance is of fundamental importance, since this law implies the intrinsic loss thus limiting several energy transfer and conversion efficiency. In theory, this classical principle is not required by thermodynamic laws but rather originates from Lorentz reciprocity. So, it can be violated by designing nonreciprocal thermal emitters composed of, i.e., magneto-optical (MO) materials, providing new possibilities to shape emission and absorption separately and open up exciting frontiers for next-generation energy devices like time-asymmetric photovoltaics, thermophotovoltaic, and radiative cooling. Nevertheless, few thermal emitters can completely violate Kirchhoff’s (|e-α|→1). Prof. Fan’s group in Stanford University has done several seminal works, but most of them depend on asymmetric coupling with gratings. The perfect nonreciprocity can only be realized by peaks shift relying on large external/internal external magnetic field. Besides, coupling conditions only ensure perfect emission peaks at specific angles, i.e., > 60°. Therefore, to flexible engineer nonreciprocal thermal radiation is still an open challenge.

In this work, by taking advantage of MO material, the asymmetric formation, annihilation, and revival processes of loss-induced TPSPs from bound states in the continuum (BICs) have been investigated, whose spectral and angular locations can be selectively tuned by material loss and upper layer thickness. The high-Q properties of both TPSPs and BICs ensure the realization of large nonreciprocity under a small external magnetic field. Especially, other than vortex beam in real space and polarization singularity in momentum space, such loss-induced TPSPs in spectral space which carry conserved and quantized topological invariants, are regarded as a new type of topology phenomenon. In addition, the criteria to predict both number and angular positions of asymmetric BICs are established, which provides new a platform to tune TPSPs over a wide angle.

On the other hand, the asymmetric TPSPs offer great possibilities in nonreciprocal radiation control, since perfect absorption can be ensured at TPSPs (zero reflection) according to energy conservation. By employing asymmetric TPSPs, it is possible to shape nonreciprocal radiation spectra over a wide angular range with suppressed absorption as shown in Figure 2. Besides, the detailed comparison of different methods in nonreciprocal thermal emitters has been given, and the proposed strategy shows superior advantages in several aspects. 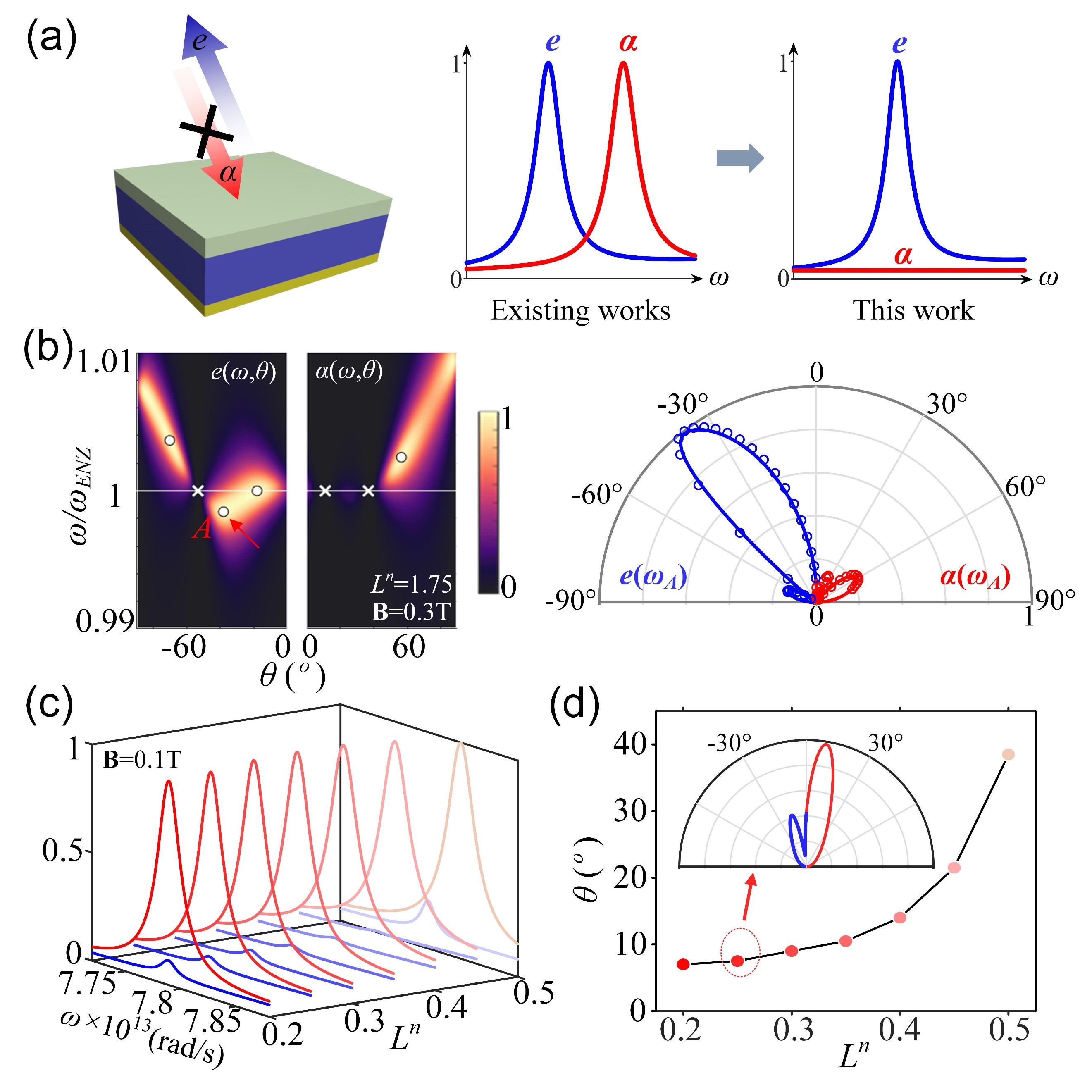